In 2013, Vitalik Buterin proposed the development of a blockchain platform supporting application development with a generalized scripting language. After that Buterim joined a team of seven other founders to develop Ethereum smart contract platform for decentralized applications. For the same crowd sale was launched and raised 3700 BTC ($2.3 million) and the project was launched in 2015. Due to the limitation in terms of scalability, cost, PoW complexity Dapps build on Ethereum failed to attract users. To solve the limitation of scalability and performance Ethereum developers introduced the Ethereum 2.0 roadmap that includes sharding, PoS, and more. Before getting into the key difference between Ethereum vs Ethereum 2.0, Let’s understand everything in detail. 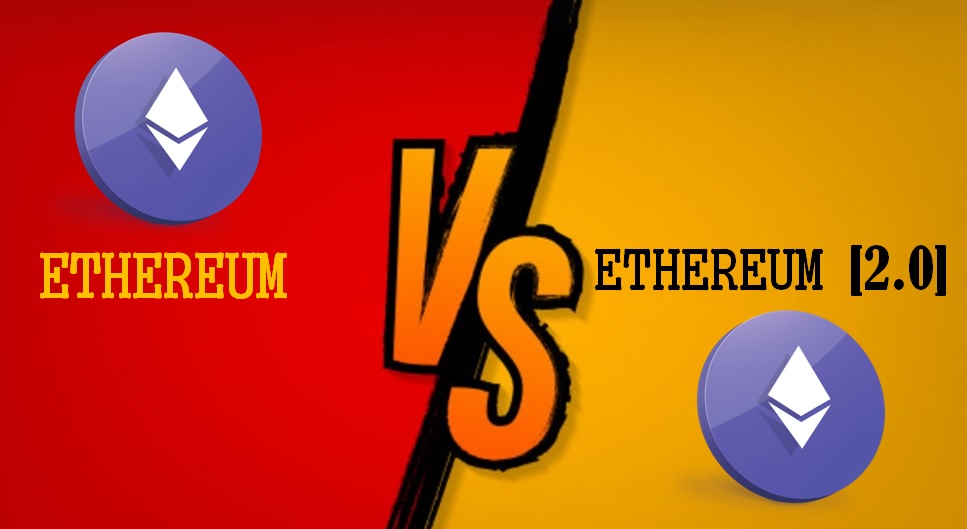 Ethereum was launched in 2015 by Vitalik Buterin, the co-founder of Ethereum blockchain. Ethereum is an open-source platform for builders to launch decentralized applications, smart contracts, shared ledgers, and other financial and legal applications. The platform is completely decentralized free from the scrutiny of middlemen, one of the prerequisites of any good blockchain network. Ethereum has occupied the number #2 spot in market value just after Bitcoin.

Before Ethereum, most of the blockchains were primarily related to the transactions of network-supported cryptocurrencies. Ethereum’s creator Vitalik Buterin thought of changing that concept and took a step forward in creating a more enhanced blockchain that will allow its users to customize data over the Ethereum network with the help of the “Ethereum Virtual Machine or EVM”. Now with EVM, users can conduct a transaction with the help of smart contracts.

Smart contracts have revolutionized digital transactions. The list of transactions you can do on the Ethereum blockchain is limitless. From paying rent, donating money on charitable trusts, to sending emails, everything can be done on Ethereum and that too within minutes with the help of smart contracts. Apart from that, Ethereum allows users to build decentralized applications along with other services like financial derivates, token economy, reputation systems, voting systems, and file storage.

Ether or ETH is the native coin of the Ethereum blockchain and is used for all the transactions including the paying of rewards to its shareholders. The ETH token is also used to buy Ethereum Gas to run the blockchain. Every transaction and even smart contracts are fueled by the Ethereum Gas. The cost or amount of gas depends on the size of the transaction. The gas prevents the network to waste its resources and saves costs.

The Ethereum blockchain was built on the Proof-of-Work (PoW) consensus mechanism. The PoW was first introduced by Satoshi Nakamoto, the man behind the creation of Bitcoin blockchain.

PoW involves mathematical computations to create new nodes in the blockchain. This process is called mining. In return, the miners get rewards in the form of “Ether”. But the process can be quite costly and involves the use of huge volumes of computational power and electricity. As the miner solves the mathematical puzzle, a block is generated in the network. After the final validation of the block, the miner is rewarded for his successful venture.

Problem With Cost and Scalability

Back in 2008, Satoshi Nakamoto implemented this process through the Bitcoin blockchain and since then many similar blockchain networks have been using this process to reward their miners. But over the years, the blockchain developers have experienced a few drawbacks in the traditional method of generating blocks. The process is not only lengthy but lacks scalability, is costly, and exhausts a lot of computation power and electricity.

51% Attack: To tamper the process, the attacker needs to outrun the total stake of all the validators in the network that is 51%, which is practically impossible.

To answer this problem, developers came out with the Proof-of-Stake consensus mechanism that they believe will solve all the problems that the blockchain community is facing today.

Ethereum has chosen to go with the Casper PoS protocol. The version of Casper is going to be implemented first is the hybrid PoW/PoS consensus which is designed to make a smooth transition into PoS. Blocks are going to be mined with PoW where every 50th block is a PoS checkpoint. This method replaces the miners with validators. To arrive at a consensus, the validators are given voting power to validate the next accepted block. The voting power of each validator depends on the amount of stake he/she holds in the network or the amount of Ether he holds in his account.

As we know, in PoW The attacker needs to hold 51% of the total hashing power, while in PoS, it is 51% of the total Ethereum coins in the network. So, PoS is a far more developed consensus protocol compared to PoW. PoS consumes low electricity and computational energy than PoW. It is more scalable and since the entire consensus depends on the amount of stake of the shareholders, it is far more secure than PoW. Read more about PoS and PoW in our article on PoW vs PoS.

The Ethereum 2.0 has moved a step forward from proof-of-stake in the Ethereum blockchain. It includes the additional features of:

The Ethereum Developer Community will be introducing new features on the Ethereum 2.0 network in the future. They are hopeful that this will speed up transactions, increase the implementation of smart contracts, and also bring in new investors in the network. However, though most of the technological developments including the implementation of the hard fork has been successful, there have been controversies regarding the development of PoS consensus in the Ethereum2.0 network. Many investors are worried about the efficacy of the network.