PoW vs PoS vs SPoS – A Comparative Study Between Consensus Algorithms

What is the Blockchain Consensus Mechanism? What is the difference between PoW vs PoS vs SPoS?

A blockchain is a ‘distributed ledger network’ and all its transactions and database are distributed in a shared manner among various nodes. These records or blocks cannot be deleted, updated or controlled by any central authority. They can only updated by adding a new block. So, in case any dispute arises in the distributed system, the consensus mechanism will take care of malicious nodes and create a balance in the system. 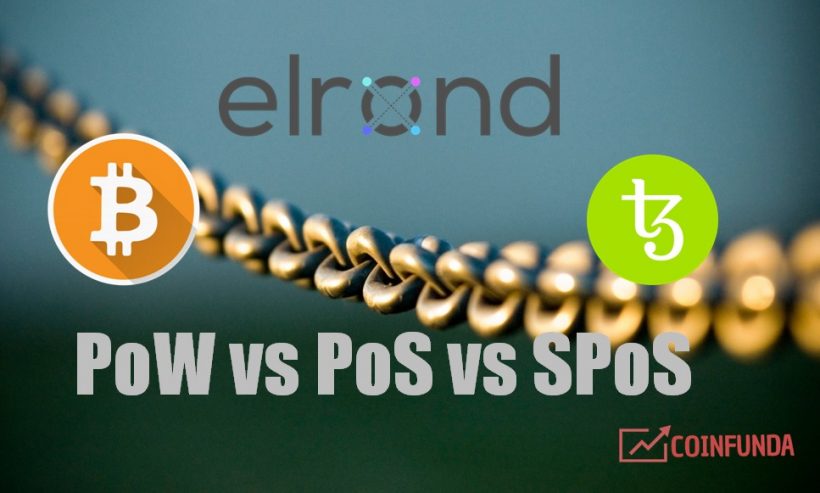 The fundamental concept and technology are not the same in all crypto coins for example there is a big difference in cryptocurrencies in their consensus. There are two most popular consensus algorithms working in the blockchain market-the PoW and the PoS. The PoW supports both bitcoin and Ethereum. However, Ethereum is currently diverting towards PoS.

PoW vs PoS vs SPoS

In 1993, Cynthia Dwork and Moni Naor came up with this beautiful idea of PoW or Proof of Work Consensus algorithm. However, in 1999, Mark Jakobsson came up with the name PoW. The PoW process is known as mining and the nodes operating are called miners. In bitcoin blockchain, transactions are grouped in a memory pool called the mempool. In mempool, a block is created every 10 minutes.

When a user requests a transaction, it is verified by a miner in the next available block. For this, the miner needs to know the hash value of the last block created. This requires no coding language; the miner simply browses through the blocks. As soon as he gets the value to the network and verifies with other nodes and creates the block. The miner is rewarded with a fraction of the bitcoin value.

This mining process is like a cryptographic puzzle and consumes great energy. Over time, the puzzle becomes easier and faster. The puzzle is revised every 14 days to make the competition harder. The PoW process though is highly secure is very costly due to the high computing energy requirement. All nodes need to validate the transaction which makes it highly scalable as well.

The miners need to continuously update their software to solve difficult puzzles. PoW is a somewhat centralized process since the mining rig needs to be organized to validate the transactions.

PoS or Proof of Stake consensus algorithm, on the other hand, is a much simpler and cost-friendly process. It works with the Ethereum blockchain. Here the transaction validation process is called ‘forging’ and here stakers stake for their own set of nodes. Validators are rewarded for their effort.The larger the stake, the better are the chances of validation and the returns are high.

PoS also involves a process called ‘sharding’. Sharding involves horizontal partitioning of the nodes and improves the scalability of the process.PoS involves no mining and hence no solving of complicated puzzles.There is no requirement of continuously upgrading the software and there is low consumption of energy. The forging process is much cheaper than mining.

PoS is completely decentralized and all the nodes does not need to involve in the system. However, since larger stakes are involved PoS lacks in security protocols compared to PoW. Tezos blockchain is an example of PoS.

SPoS or Secure Proof of Stake consensus algorithm is an improvement in the already existing PoS mechanism. It operates on the Elrond blockchain protocol and ensures more security and fair distribution. The system is also much cheaper than PoW.

SPoS slightly differs from Algorand’s principle of a random selection of validators. Instead, each node selects the members of the consensus group depending on the aggregated signature of the last block.

As compared to Algorand, the time takes only 100 mps to select the committee. The consensus group is selected depending on the stake and ranking of the group in previous transactions. SPoS operates on multisignature scheme of Bellare and Neven.

Elrond is a modern comprehensive blockchain system designed to ensure more scalability, security, interoperability, and efficiency in the ecosystem.

Sharding divides the transactions into horizontal nodes and involves lesser energy and computational knowledge. The more the shards, the more transactions it will generate.

To accommodate the need for high demand for shards, Elrond has adopted a new concept called the “Adaptive State Sharding” which ensure more scalability and decentralization of the system.

How is Elrond different from other Blockchains?

Unlike Algorand, Elrond increases transactions through sharding process. The selection time of the consensus group is also far less only 100mps compared to 12 seconds of Algorand.

As compared to the Zilliqa blockchain, Elrond uses the State sharding mechanism. It also operates on the EVM (Earned Value Management) mechanism which ensures interoperability between blockchains.