Why Are Cryptocurrencies Going Down?

What on earth is going on, and why are cryptocurrencies still going down? Let’s see if we can give you a straight (ish) answer.

This, of course, is the burning question on everyone’s lips. Cryptocurrencies were the big story of 2017. After the bear market of 2018, things have quietened down, and fewer people are talking about crypto or showing much interest in investing.

When you look at the significant altcoins, the story is even more tragic. Bitcoin cash topped out at just shy of the $4000 level in December of 2017 and is now trading under $300.

Ethereum, the major success story of the last bull market, soared to $1400 in January of 2018 and is still struggling under $200. Litecoin, too, reached as high as $370 in December of 2017 and is currently trading under $70. Say what you will about Ripple, it was still one of the important stories of the last bull market. It reached an unbelievable $3.29 per coin at the beginning of 2018 and is now trading at $0.25.

So, those of you who held firm throughout last year are rightly asking: What on earth is going on, and why are cryptocurrencies still going down? Let’s see if we can give you a straight (ish) answer.

We’ve been here before

If you remove all the other market variables from the equation, the fact that we’ve been here before, price-wise, is one of the reasons that we’re struggling. Let’s take bitcoin as a proxy for the entire crypto market.

We’re currently trading at around 10k. The all-time high was at about 20k. So, think of all the bagholders who bought in at between 10k and 20k. All of these holders are still out of pocket. When the price finally recovered a year and a half later, the holders who were burned and now desperately need their money back inevitably started to sell.

Therefore, as you can see from the chart below, the sell volumes that we’ve seen in the past couple of months are the highest since early 2018.

The first time around the price had never been as high before; these price levels were undiscovered territory in the middle of a massive rally. This time around, people have already been burned, they are way more conservative, and there is much more selling pressure. 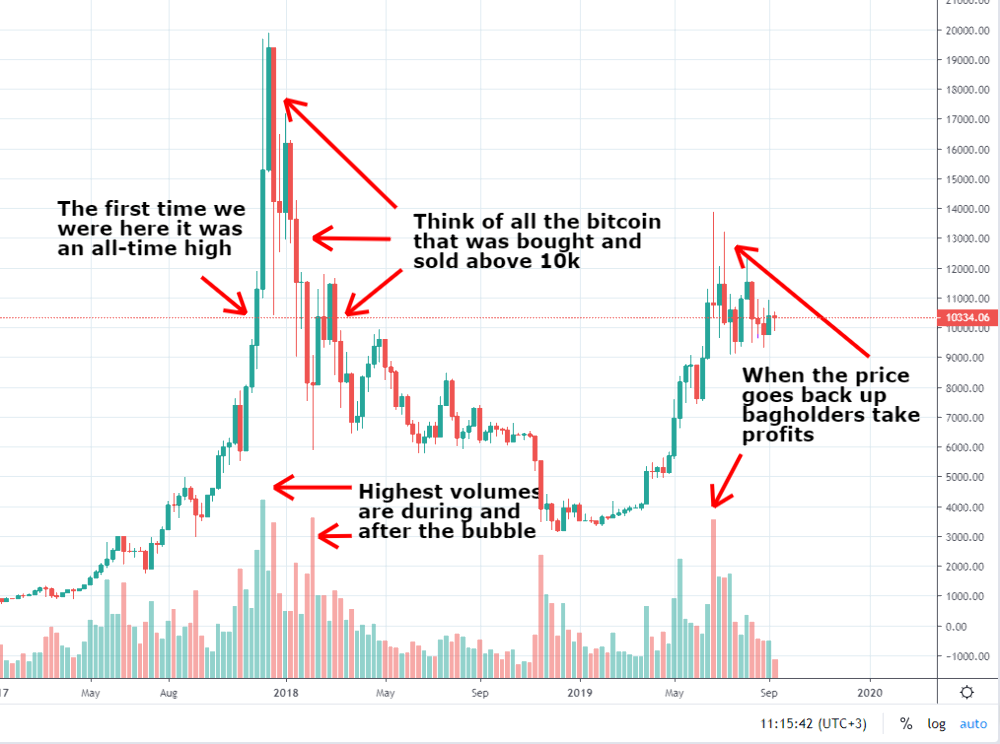 Are cryptos going down?

Crypto traders are spoilt. Let’s just come out and say it. In 2017 bitcoin went up by some 2000%, and now people act like if it’s not a hundred percent move up then we’re crashing. Let’s put things into perspective. The S&P 500 is one of the longest bull markets in history. It’s been steadily going up since around 2009. In 2017 the S&P 500 recorded gains of less than 40%.

Do you see why crypto traders are spoilt? What’s more, it’s not even correct to say that cryptocurrencies are also going down, to begin with. This year alone bitcoin has gone up some 190%. We’re still a long way away from the all-time highs, granted, but only in crypto land can a 190% move be considered going down, just because we recently dropped from 14k to 10k.

Even the altcoins that haven’t been performing as well are still up for the year. Ethereum is up some 55%; Bitcoin Cash is up around 150%. Litecoin is up about 130%. In fact, of the cryptocurrencies we mentioned at the beginning of this article, only Ripple is down (by 20% or so).

What goes up, must come down

Everyone’s complaining about the price but take another look at the chart. We almost hit $14,000 back in June. Healthy markets don’t do what bitcoin did back in 2017. Nothing goes straight up. What goes up, necessarily has to come back down.

And what we’ve seen since June of 2019 looks much more like a market coming down to test/find support. It’s called healthy consolidation. We run-up, then we must cool off and come back down to see some support level that we can push off against once more. This doesn’t mean that we’re going to the moon from here. But it doesn’t mean that we’re crashing either.

The ups and downs of the financial markets has another mover, and Ever FX explains it in depth

Furthermore, if you look at the chart below, you’ll see that in 2019, the bitcoin price has risen above four lower highs that it set during the bear market of 2018.

As you can see from the dotted red line, we’ve recently fallen below the lower-high of $11500, which is now our next significant resistance level. This period of consolidation that we see now is essentially the calm before the next storm.

We either come back up to retest resistance and blow past it, or we fail to break it again. That’s when we’ll need to start asking why bitcoin is going down if it tries and fails to break above $11500 on the next move up. 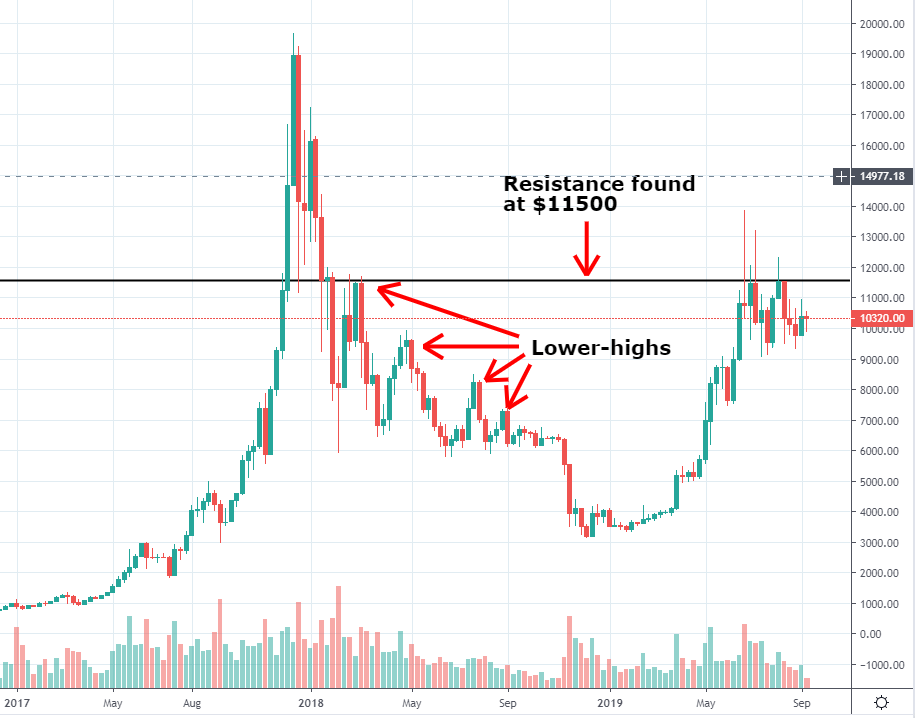 What about the altcoins?

Okay, this is the real thorny topic here. Let’s be clear. Most altcoins are going to 0. Why?

Because most altcoins, just like most start-ups that are ever founded, have no business being in business in the first place. They are just attempting to cash-in on a good thing. That’s what this phase is all about. Bubbles happen, everything gets over-inflated, people go coo-coo and start believing that they’re geniuses and everyone’s going to be productive. Then the chickens come home to roost.

The crash after a bubble is a natural corrective mechanism, just like consolidation after a significant move up (it’s just more severe in the case of bubbles). What crashes do is filter out all but the strongest and most fit. Those in it for the long haul will survive. Those who came along for a quick buck will move on.

And as far as alt season is concerned, we’ll have another one of those, but it won’t be like 2017. It won’t be 1000 weird-sounding ICOs with very tentative reasons to be on blockchain.

And it will only happen after the market becomes convinced that bitcoin is here to stay, that this new 2019 rally is real and that cryptocurrencies have a future. You know that. I know that. Let’s wait and see how long it takes the market to know that finally.