Indians take third place among Freewallet visitors. Along with that, the share of purchases made by Indian customers makes up only 1.8% of purchase deals from the USA, taking first place in the Freewallet traffic flow. 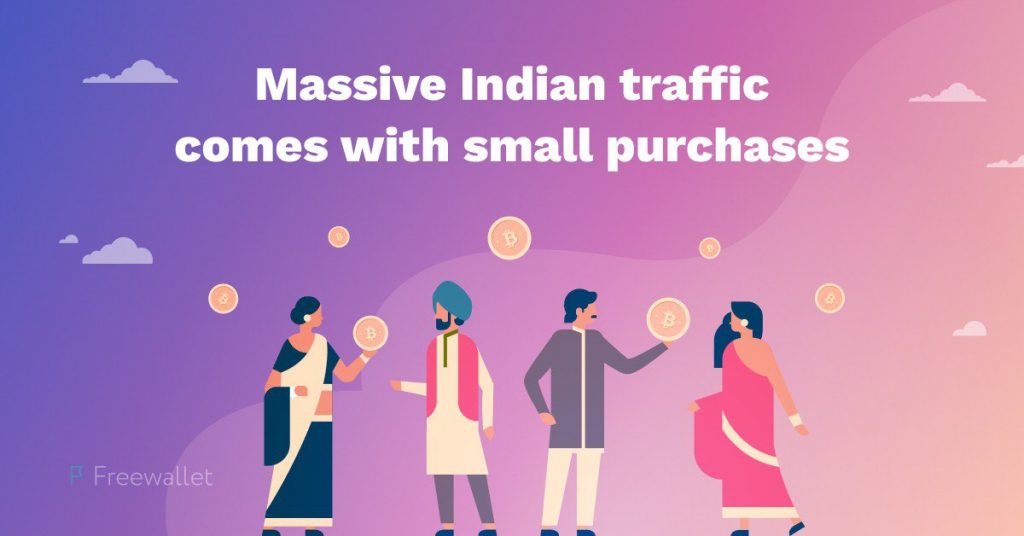 The richest Indian state is not among the traffic drivers

It’s no surprise that residents of the second most populated country comprise up to one-third of Freewallet users. This has made Hindi the fourth most popular language in the Freewallet apps. However, the impressive traffic of visitors from India is not reflected by the low figures of customers’ performance. Most probably, these numbers are affected by national economic conditions.

According to Solomon Brown, Head of PR at Freewallet, India maintains 140% of users as compared to the UK. But with 17.50% of the world population, it only makes up 26.9% of the traffic coming from the USA, where 4.24% of the world’s population resides.

When it comes to purchases in crypto wallets, Indians only produce a small fraction of the buying activity of the US and UK customers. Explaining this fact, we can turn to the GDP per capita rating with the USA being in 10th place and India in 121st. Leaving the UK behind in GDP per capita, as well as population and traffic to the crypto wallet, the USA comes in close proximity to the UK as the most active buyer of crypto.

What are the favorite coins in the UK and the US? In descending order, they are Bitcoin, Ethereum and Litecoin. As reported by Solomon Brown, the breakdown is different for India, with Bitcoin as the clear winner followed by the more affordable Ripple and Ethereum coins. Bitcoins purchased by Indians make only 1.8% and 1% of that amount purchased by the US and UK customers, respectively. In the case of Ethereum, these figures are 2.6% and 0.8%.

Meanwhile, there are millions of Indian crypto users and hundreds of thousands joining them every month. It’s noteworthy that sources of major traffic from this country to Freewallet apps do not overlap with the top Indian states by GDP with the exception of Delhi, keeping its leading financial role. The top 5 Indian states that generate the most traffic are Maharashtra, Delhi, Karnataka, Telangana, Gujarat whereas the leading states in terms of GDP are Goa, Delhi, Sikkim, Chandigarh, and Haryana.

The outlook for crypto in India

2017 was a record-breaking year for all crypto-related figures be it web traffic, or volume of operations with digital coins. India was not immune to this rally that unfolded December 2017 — January 2018.

The history of crypto adoption in India is almost typical for the region, showing a tremendous demand in virtual currencies. Following many governments in their disapproval of crypto operations, India’s authorities banned financial institutions from providing crypto services as of April 2018.

News broke in early March that India’s Supreme Court ruled the Reserve Bank of India’s banking ban as unconstitutional. In other words, it means that INR (Indian Rupee) deposits to crypto exchanges are now possible. However, some banks in the country are still refusing to process crypto transactions at their own discretion.

The implication for this step is a tougher AML and KYC policy emerging as the new standard for local exchanges. At the same time, the whole regulation framework is sticking with a pending draft bill seeking to ban the use of digital currency. The last winter session of parliament has not seen this draft law and the legal status of crypto in India is still uncertain. With all this obscurity, crypto transactions in India are common and regular.

Although much is stipulated by the legislative framework and health of the national economy, the situation with crypto in India conceals serious potential for further growth. Lift of the Reserve Bank’s restriction for financial institutions alone is a step forward in this process.