Freewallet has joined forces with Changelly to combat the crisis by opening off-chain exchanges for a list of 54 coins and ERC20 tokens, including BTC, ETH, EOS, and LTC. Off-chain exchanges are executed in 2-3 minutes and characterized by better rates and enhanced anonymity. 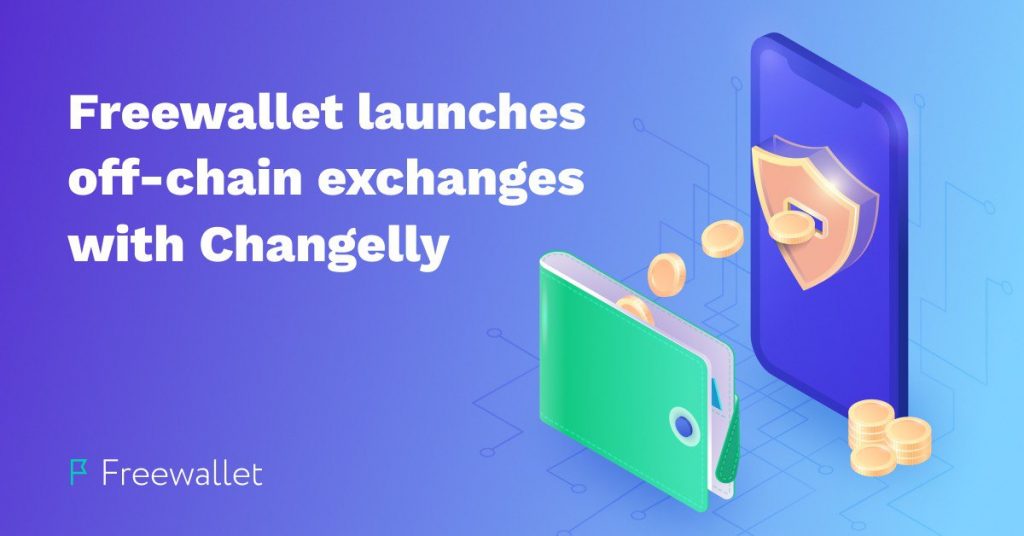 First of all, Freewallet customers opting to go off-chain will only have to pay for the exchange of their assets, without having to pay any transaction fees because off-chain exchanges don’t touch upon the blockchain itself. There is no reason to move assets to another cryptocurrency exchange and operate there because the exchange rates provided by Freewallet are as profitable as those at Changelly.

Secondly, off-chain exchanges are executed in 2-3 minutes because they do not depend upon the network load and number of transactions waiting in the queue to be confirmed, so there is no lag time. This advantage can play a significant role in a highly volatile market environment.

Third, off-chain exchanges provide users with enhanced anonymity, because transfer details are not broadcast publicly. Concerning on-chain transfers, it is possible to partially determine a participant’s identity by studying trading and purchasing patterns. However, even though off-chain exchanges are more anonymous, Freewallet, as a custodial wallet service, is capable of retroactively identifying off-chain exchanges by Request ID should anything go wrong.

“Freewallet remains one of my favorite wallet apps out there and our partnership continues to go from strength to strength. With the ability to perform off-chain transactions, Freewallet now performs at a much higher speed and the overall cost for the customer has, in turn, become lower. We will provide more assets in the future for off-chain settlement once interest in the feature has gained more traction” – said Eric Benz, CEO at Changelly.

The whole list of cryptocurrencies for off-chain exchanges includes 54 coins and ERC20 tokens and probably will increase. The accessibility of each cryptocurrency should be clarified before the operation.

“We’ve been working with Changelly for a long time. Our successful experience together and mutual trust have allowed us to integrate off-chain exchanges into Freewallet and thereby further advance in our goal of providing the best service possible to our over 3 million users” – said Solomon Brown, Head of PR at Freewallet.

It’s worth mentioning that previously off-chain technology was integrated for fee-free transactions between Freewallet users. Additionally, concerning currencies that are not included in the off-chain program at the moment, Freewallet’s built-in-exchange remains available for transfers.

Changelly is a non-custodial instant cryptocurrency exchange, which means that no user funds are held on to by the service. Changelly acts as an intermediary between crypto exchanges and users, offering access to 150+ cryptocurrencies. The company’s mission is to make the exchange process effortless for each and everyone who wants to invest in cryptocurrency.