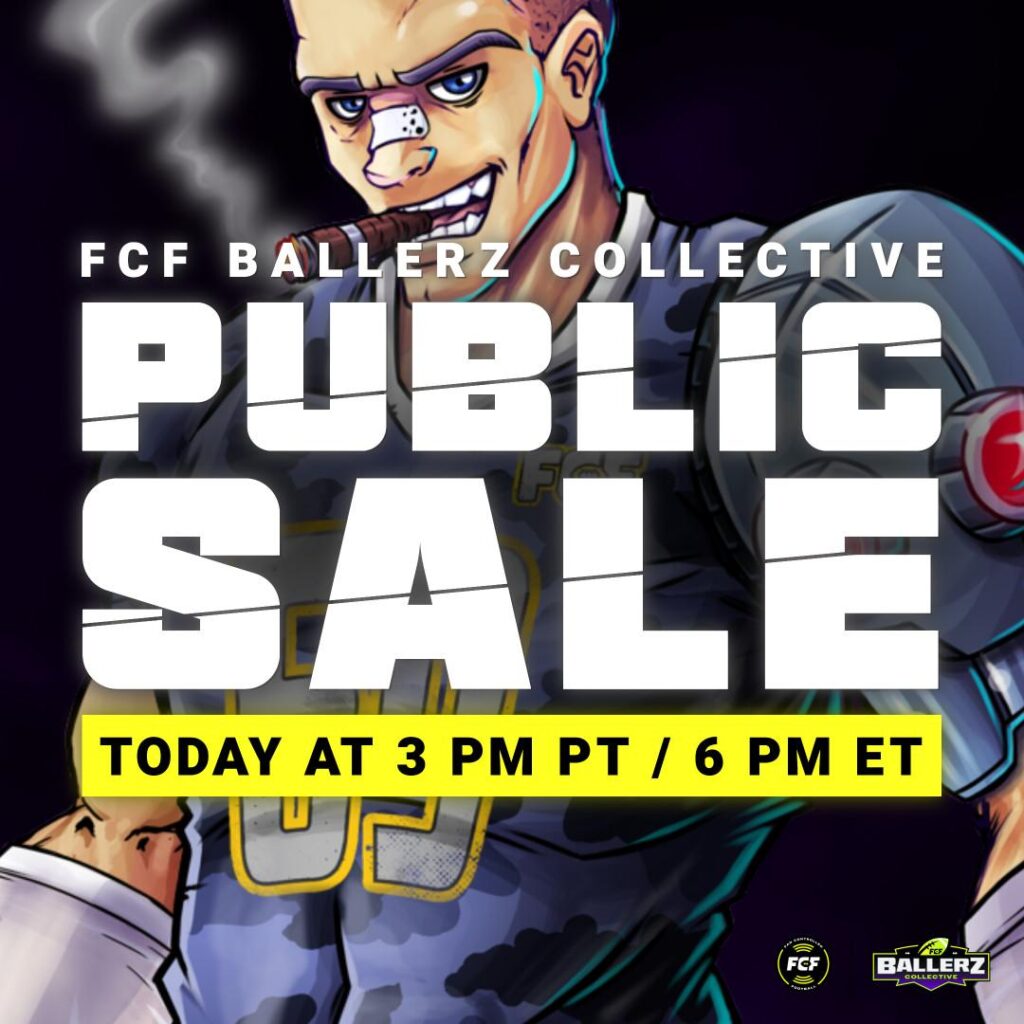 Fan Controlled Football (FCF), the only professional sports league that empowers fans to make key decisions for their favorite team, including calling plays in real-time, today announced the Ballerz Collective NFT mint, marking one of the biggest NFT drops ever with four separate collections each containing 8,888 digital collectibles.

The Ballerz Collective is a first-of-its-kind NFT community where holders get to choose and control one of the four new NFT expansion teams joining FCF in Season v2.0.

FCF’s public mint will take place on www.fcf.io/ballerzcollective starting February 5, at 6:00pm EST. There will be a total of 8,888 unique Ballerz Collective NFTs per team with a public sale price of 0.1776 ETH each. To join the team and get in the game, follow the Ballerz Collective on Twitter and join the FCF Discord.

“Our historic NFT mint is the latest in our evolution to be THE league for the digital age fan,” said FCF Co-Founder and CEO Sohrob Farudi. “We are not afraid to try things never done before in sports, giving our fans unprecedented control of our game. We know the Ballerz Collective is going to be huge for our league, our fans, and the future of blockchain in sports.”

The Ballerz Collective NFT teams include:

● Knights of Degen led by their founders and community members, which include NFL legends Tiki and Ronde Barber, Cynthia Frelund from NFL Network, Jasmine Maietta from Round21, Drew Austin, and more.

● Team 8OKI, led by two highly recognized blockchain advocates – famed musician and producer Steve Aoki, and 888, legendary collector and founder of 888 Inner Circle and 888 The New World whose mission is to empower artists, creators and the digital art community.

FCF made its debut in February 2021, featuring four teams owned by some of the biggest names in sports and entertainment including Marshawn Lynch, Quavo, Richard Sherman, Austin Ekeler, Dalvin Cook, and Bob Menery. The league has redefined football for the digital age by combining the competitiveness of live sports, the engagement of fantasy sports, and the interactivity of video games into a live streamed, leaned-in fan experience. Season v1.0 saw FCF become the fastest growing live sports channel on Twitch with nearly 10 million total live views, and one of the top sports Apps in the Apple App Store.

The four original FCF teams included the Beasts, Glacier Boyz, Wild Aces, and Zappers. On March 20, the Wild Aces went on to become the first-ever FCF Champions, after defeating the Glacier Boyz in “The People’s Championship” on a last second, walk-off QB read-option touchdown called by the fans.

About Fan Controlled FootballFan Controlled Football (FCF) – the only professional sports league that combines the passion and competitiveness of live and fantasy sports with the interactivity of video games – is the first league in professional sports history empowering fans to call the shots, from branding and personnel decisions to real-time play calling. The FCF is the democratization of sports with Season v2.0 expanding to eight (8) teams kicking off in the Spring of 2022, featuring seven regular-season weeks and one playoff week, culminating with the People’s Championship. Regular and postseason play, in addition to exclusive behind-the-scenes league content, is available on twitch.tv/FCF and broadcast partners NBCLX, Peacock, and DAZN. For more information download the FCF mobile application, visit FCF.io and join the conversation on Twitter, Facebook, Instagram, TikTok and Discord.