Blockchains of Tomorrow — Challenges and Solutions

Late 2020 and early 2021 were marked by a massive hype around cryptocurrencies eventually being recognized as a payment medium by some ‘traditional’ companies. Thus, PayPal has acquired the startup Curv, which will enable the service users to transact in Bitcoin and other cryptocurrencies. In March, Elon Musk announced that electric cars can now be bought with Bitcoin, one vehicle being worth one coin. Visa is launching a pilot project jointly with Crypto.com that will use the USDC stablecoin. The cryptocurrency march towards the financial sector is picking up pace. 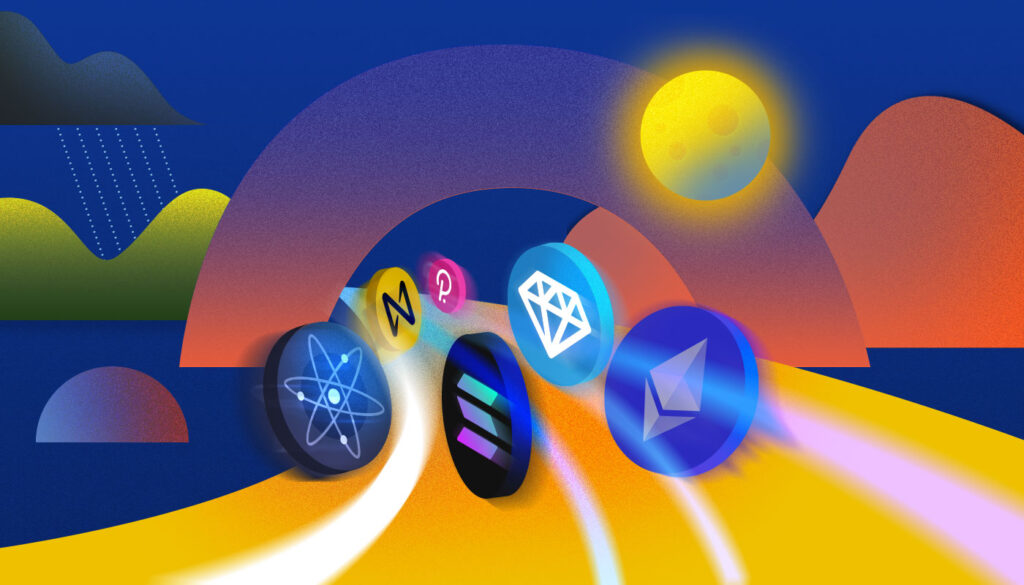 The trend has spawned media publications which are attracting non-crypto users to the industry, with the most vehement sceptics taking interest in the ‘future money’. The mass media hysteria coupled with the developers’ efforts to improve user experience are speeding up the flywheel of staking, farming and swapping. Yesterday’s crypo geeks are becoming crypto millionaires, unknown digital artists are selling their works as NTFs for dozens of millions of dollars at the largest ‘traditional’ auction platforms. The air is getting thicker with ludomania pervading the masses: buy ‘cake’, swap it with ‘watch’, stake ‘kebab’ and get ‘beefy’ or ‘salt’ at a higher APY rate.

Behind a smoke screen of incredible profits, many tend to forget that a bullish market can be hit by a bearish overturn, and global correction won’t spare Bitcoin or Altcoin holders. Those who remember the crypto winter 2018 are being more cautious, keeping one eye on popular, hyped-up coins and capitalizing on exchange rates, and the other eye on emerging fundamental blockchain initiatives. The latter address the challenges faced by the entire industry: speed, interoperability and scalability, and are most likely to survive any market turmoil.

Somehow such challenges are being addressed by a small handful of developers: Etherium 2.0, Cosmos, Polkadot, Solana, NEAR, and Free TON. Ethereum 2.0 will go live in 2022, so we are left to wonder what problems and how will be fixed in the world’s second popular blockchain network. The other projects have already come up with some technological solutions that will enable the mass adoption of blockchain networks alongside with traditional (offchain) solutions.

The average number of transactions per block in the Bitcoin network is 2100 in 600 seconds, i.e. merely 3.5 tps. The Ethereum network is a bit faster with 162 transactions in 14 seconds, which makes 11.5 tps. On a side note, the VISA network can process 65,000 tps. As you see, the gap between these figures is enormous.

In May 2020, two next-generation blockchains were launched — NEAR and Free TON whose transactional throughput comes close to offchain networks. NEAR handles an average of 4,000 tps while Free TON holds the record with 100,000 tps. This was made possible due to the use of dynamic sharding.

Sharding allows the transactional load to be spread out across network nodes. Each node is only responsible for its part of computations, rather than for processing the entire network’s workload, which allows other nodes to handle other states in parallel. Dynamic sharding can be compared to a store that easily adapts to the changing customer flow and promptly opens new desks (a next-generation blockchain) while other stores (old-generation blockchains) have only one cash desk at their disposal. Free TON technologies also enable shards splitting in response to the growing load. The number of shards in this network is not limited by the architecture, which exceeded 200 during the recent load testing. The NEAR network, for instance, only supports 8 shards.

Put your hands in the air

The blockchain technology was conceived as open and decentralized. However, certain networks are cut off being unable to interact with the outside world, which goes against the principle of decentralization. Transaction types, consensus and hashing algorithms of a particular network are designed to solve specific tasks. If we add regulation, governance models and fundamental design differences, the dish will have too many ingredients that do not go together.

The cost of transactions in the Bitcoin and Ethereum networks depends on the token exchange rate and the current network load. Given the persistent upward trend, the spending could exceed 200 US dollars. How to reduce the cost and speed up transactions? The solution would be a bridge which allows assets to be transferred from a slow and expensive network to a quick and budget-friendly one. Tokens as such do not leave their native network, they are locked under a separate smart contract (if this feature is supported by the network) with a mirror copy minted in the target network. Where a user wants to return to the source network, the mirror copy tokens are burnt and the original ones are unlocked and transferred back to the holder’s wallet.

Bridges are being actively developed for the Cosmos, Polkadot and Free TON networks. Earlier this year, the Althea Network developers announced a Gravity Bridge project which aims to connect Ethereum and Cosmos. The bridge is currently in the testnet and is expected to go live in the second quarter of 2021. Polkadot finances the development of such solutions by providing grants, which have been awarded to four independent teams to connect Bitcoin, Ethereum, EOS and Tendermint. The Free TON, a community-developed decentralized network, uses contests as an incentive. The first stage of the Ethereum bridge contest ran at the start of 2021. The winners were the Broxus team, who came up with an FT-ETH Bridge MVP. During the second stage completed in early April, the solution was fine-tuned into a full-scale viable product. Ethereum users are now able to transfer their tokens to the Free TON network for a couple of cents.

Solving the fundamental issues of speed, latency and interoperability will enable the networks to be connected into a seamless ecosystem. This will streamline user interaction and attract more investors thereby pushing forward the development of blockchain-powered services. Though it is hardly possible to pick a leader in addressing this range of tasks, it is a safe bet that as early as this year we will be able to exchange DOT to TON Crystal without third parties involved. It won’t be long before onchain products and services become available to the general public.